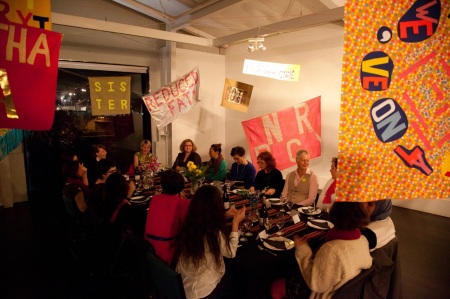 LEVEL was founded in 2010 by artists Courtney Coombs, Rachael Haynes and Alice Lang. From 2010-2011 LEVEL operated as an all-women gallery space with artist studios. In 2012 LEVEL was commissioned for a major project ‘Food for Thought’ as part of the Melbourne Next Wave Festival. This was the first in a series of participatory artworks, which were subsequently staged in exhibitions and events at national and international venues including the Australian Centre for Contemporary Art (ACCA), Melbourne (2017-18), George Paton Gallery, Melbourne (2015), Gallery of Modern Art (GOMA), Brisbane (2014); Museum of Contemporary Art (MCA), Sydney (2013); Griffith University Art Gallery, Brisbane (2013); Performance Space, Sydney (2012) and Rojitohito, Tokyo (2012). In 2018 LEVEL took part in the Doing Feminism-Sharing the World Residency Program at Norma Redpath House, Melbourne.

LEVEL would like to thank all of our friends, colleagues and collaborators, who have worked with us over the last nine years. We will be continuing our feminist work both individually and together in new forms and partnerships. If you would like further information about LEVEL or our projects contact any of the previous members –Rachael Haynes, Courtney Coombs, Caitlin Franzmann,Courtney Pedersen, Anita Holtsclaw or Alice Lang.